(Disclaimer: Karen and I pray regularly. I respect all who profess religious affiliations other than my Christian faith, as well as those who are agnostic or atheist.)

And what does that have to do with our long deceased president?

Today, March 12, marks the 117th anniversary of his death, and I’d bet dollars to donuts that very few Americans observed the occasion. I did.

I’m a lover of American history. I think we need to turn back the clock every now and then and remember where we came from as a nation. Admittedly, I didn’t know much about our 23rd President. Maybe for good reason. Historians generally rank him at the bottom half of successful presidencies. 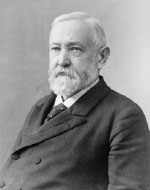 Turns out he came from good stock though. He was the grandson of our 9th President, William Henry Harrison, and the great-grandson of Benjamin Harrison, signer of the Declaration of Independence.

Anyway, something our third Mr. Harrison wrote to his son, Russell, caught my eye, and I share it with all you who pray and those who don’t: “It is a great comfort to trust God—even if His providence is unfavorable. Prayer steadies one, when he is walking in slippery places—even if things asked for are not given.”

I wonder if we’re still a praying nation. *Barna research says 84% of adults in the U.S. claim they had prayed in the past week. That has been the case since Barna began tracking the frequency of prayer in 1993.

Further, a Newsweek poll titled “Is God Listening?” indicated that, of those who pray, 87% believed that God answers their prayers at least some of the time. Even so, they prayed even when their prayers went unanswered.

Our nation’s long-standing proclivity to pray goes back to our founding and includes all major faith traditions. To wit, after every national tragedy, like the most recent one at Marjory Stoneman Douglas High School in Parkland, Florida, we grieve together as a national community, calling on each other to keep those afflicted in our “thoughts and prayers.” Our politicians, religious leaders and other public figures, like President Donald Trump after the Florida school shooting, lead us in offering “prayers and condolences.”

Yet…speaking about the power of prayer, our vice-president’s Christian faith is mocked on national TV as “mental illness.”

And how about school prayer? In two landmark decisions, Engel v. Vitale (1962) and Abington School District v. Schempp (1963), the Supreme Court established what is now the current prohibition on state-sponsored prayer in U.S. schools. I think it’s fair to argue the merits of this issue on both sides. But I also wonder if our children are better or worse off since prayer became off-limits in the classroom.

And it’s interesting to note that a federal court recently upheld two centuries of tradition in a decision allowing Congress to open its sessions with a prayer.

The Bible contains 377 references to praise and 375 references to prayer. The Apostle Paul wrote that we should pray without ceasing. Well, I’m not there yet—not by a long shot. But when I do pray, I feel connected to a power that strengthens me in my weakness.

Historians may not rate president Benjamin Harrison as a highly effective Chief Executive. But there’s evidence they’ve never taken into account his personal and official integrity.

* Barna Group is a visionary research and resource company located in Ventura, California. Started in 1984, the firm is widely considered to be a leading research organization focused on the intersection of faith and culture.