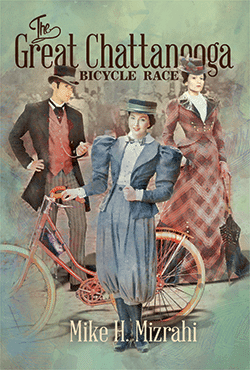 Synopsis: Anna Gaines, an introverted nineteen-year-old, discovers she’s a natural on the “wheel” after a visit with her aunt in Brooklyn. Upon returning home to Chattanooga, she insists on the same rights that have been given to men to cycle in public. She becomes the first woman to ride the streets of Chattanooga, clad in the risqué costume that many New York women are wearing in 1895—bloomers.

A firestorm ignites, pitting a few progressive thinkers against a city full of moralists intent on clinging to their post-Antebellum way of life. Anna, beset by insecurities born from a horseback riding accident as a pre-adolescent that leaves her with a pronounced limp, dangles in the middle of an explosive controversy she never envisioned. And she is pitted against Peter Sawyer, the Cycle Club President who silently harbors a crush for her, in a five-mile bicycle race that will decide if women have the same capabilities as men to ride.

Disagreements between Anna and her mother always followed the same pattern. Why not sit on the couch, where they could face each other and talk things through calmly? But no. She walked behind Mama from the sink, the dishes now washed and stacked neatly for the next meal, as Mama continued to rail against the idea, working herself into a tizzy. The dressing down exasperated Anna; apparently she lacked everything from common sense to Southern culture to understanding the rules that real ladies follow.

Outside, both of them disengaged, thankfully, as they each carried two buckets filled with leftover slop to the pigsty. The animals snooted, several rolling in the mud, until they saw their meal being dumped into the trough. Anna smiled as they head-butted and snorted with delight, the chomping and squealing one of her favorite farm choruses. The respite helped to calm her.

The deep ravine that separated her from Mama seemed almost as insurmountable as Pickett Gulf from top to bottom. That place held her most cherished memories of past family travels, even though the spots she wanted to climb down to were unreachable. Much like her mama at this moment. The loud white water fell from the river above, where she used to stand and daydream, and gathered into a small lake below. How she longed as a child to venture down. Rugged rock formations and trees surrounded the water, making passage impossible.

As Mama poured the contents of her bucket into the pen, Anna pictured her mother standing high above the gulf, calling out warnings about the dangerous waters, but the younger Anna in this imaginary visit swam to her delight, enjoying the panoply of sights and sounds. Desperate to be set free, in a flash, she swam beyond the lake, riding a rapid toward new discoveries, her mama’s voice fading away.

There at the pigpen, the chasm widened, as Mama sidestepped her, collected some gardening tools in the shed, and walked toward the front of the house. Anna followed her, silent, as Mama continued her gardening project. Small in stature, she hunched as she hoed, her deep hazel eyes still misty, the furrowed lines etched in her forehead and her cheeks appearing more pronounced. Perhaps this was due to Mama’s anxiety or concentration over the disagreement. Or maybe for the first time, Anna had become aware of the years taking their toll on a hardworking farm wife who had begun to tire.

As Anna gazed at her mother, she wondered how many wrinkles she had chiseled into her face. The accident and long convalescence had carved their share. And now the worry she faced from a community shunning, her daughter being branded a woman of ill repute. Should she say anything more about the bicycle or let the subject slip away for now? Mama began to sow the flowerbed.

Unable to help herself, she jumped back into a contest of wills. “Give me a chance to explain, Mama.” No sooner than the words had left her lips, she wanted to catch them in the air and shove them back into her mouth. With a scowl, Mama shot back.

“These progressive ideas about women and their changing place in the family and community may be fine in New York City, but not here.”

“Mark my words—never in Chattanooga, let alone the Deep South.” She poked a long finger toward Anna’s face for emphasis. Mama’s flushed cheeks and neck told Anna that she had reached a heightened state of agitation, in which a smoking and flaming volcano was now about to spew streams of lava.

At the risk of being consumed by Mama’s magma, Anna tried one last time to make her understand. She chose her words carefully, clothing them with respect as she attempted to break away. “Riding a wheel is clean fun and wonderful exercise, Mama. Can a simple bicycle turn me into a reckless girl? You taught me a woman’s proper place, and the bicycle won’t change me.”

How she longed for understanding between them.

“I’ll not allow Harriet to influence my only daughter with her harebrained schemes about cycling. Women on wheels. Honestly, things are getting out of hand.”

“No. The matter is finished. Please tell Oscar to thank his mother for her thoughtful gesture, but he can return the bike and get a refund.”

This time, the argument did end—at least between Anna and her mother.