Lincoln and the Great Book 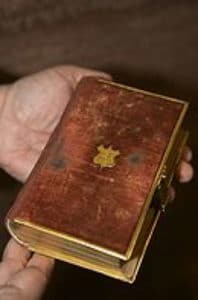 On this day, Sept. 7, 1864, a deputation of blacks from Baltimore visited President Abraham Lincoln. They presented our 16th President with a special gift: a Bible. In thanking them, here is what he said:

“In regard to this great book, I have but to say, it is the best gift God has given to man. All the Good Savior gave to the world was communicated through this book. But for it, we could not know right from wrong. All things most desirable for man’s welfare, here and hereafter, are to be found portrayed in it. To you I return my most sincere thanks for the elegant copy of the great Book of God which you present.”

(On March 4, 1861, Chief Justice Roger B. Taney administered the oath of office to Abraham Lincoln using “the Lincoln Bible” provided by William Thomas Carroll, clerk of the Supreme Court. Lincoln’s family Bible was packed with other belongings that still were en route to Washington from Springfield, Illinois. In the back of the velvet-covered Bible, along with the seal of the Supreme Court, the volume is annotated:

“I, William Thos. Carroll, clerk of the said court do hereby certify that the preceding copy of the Holy Bible is that upon which the Honble. R.B. Taney, Chief Justice of said Court, administered to His Excellency, Abraham Lincoln, the oath of office as President of the United States.”

On January 20, 2009, President-elect Barack Obama also took the oath of office on the Lincoln Bible. On January 21, 2013, Obama again used this Bible, along with the Bible belonging to the Reverend Martin Luther King, Jr.)