My conclusions about this amazing country: God must be Italian, and heaven is any one of the countless gelato shops in every city.  And the piazzas. (No…not pizzas!) The ancient Romans and medieval Italians seemingly understood effective urban systems far better than many of our 20th Century city planners. Confession: I know nothing about the subject, other than the traffic in L.A. that limps along for hours on most days.

If you haven’t been, but it’s on your bucket list, I wish for you a vacation in Italy like we just experienced. A whirlwind, from Rome to Assisi, and then on to Sienna, Florence, Cinque Terre, and Venice, we walked over a hundred miles in seventeen days! A great justification for consuming two hundred miles of pasta, lots of great wine (I won’t reveal the amount in public), and more gelato than the amount of ice cream I’ve eaten since birth. Believe it or not, neither of us gained any weight!

The amount of ancient art and architecture is mind numbing (think…the David, the Sistine Chapel, Saint Peter’s Basilica, the Duomo in Florence, the Coliseum and Forum and Pantheon in Rome, and another 75% of the world’s art that I felt like we viewed). Sensory overload. I loved the Italians…mostly the ones outside of Rome…and the new friends we met along the way. And the poetic sound of the language. (Ay-y, that’s a some-a spicy mea’ball’a.) Anyway…

So many sites and sounds pricked my imagination. I mean, think about walking past the crypts of the Apostles Peter and Mark, and St. Francis of Assisi. But here’s what struck me the most as I’ve reintegrated into life back home. Thanks to the many piazzas built into the urban centers, there must have been a keen sense of place and perspective for the citizens of old Italia that I think eludes many Americans today. Me included. 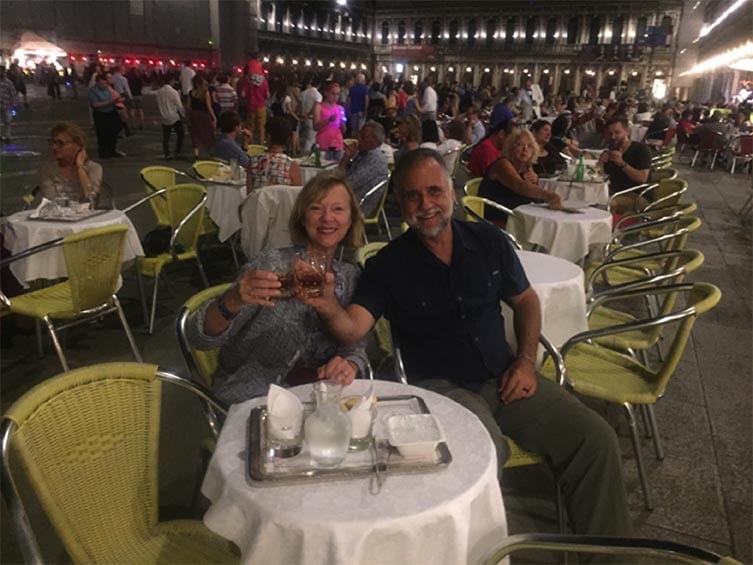 Karen and me at the Piazza San Marco, the principal square in Venice. St. Mark’s Basilica stands at the opposite end.

I’m not a romantic who wishes he were born in a different era or place. Seven hundred years ago, life for the Italians, and everyone else on the planet, was no gelato party. But piazzas, open exterior places at the beginning or end of so many urban streets, served as ritual centers, public meeting grounds, marketplaces, and political centers for the people. Life was centered.

As Karen and I strolled, and sometimes ran (to catch a tour on time) through the narrow roadways lined with brick and stone buildings, I imagined neighbors conversing or even arguing from open windows on opposite sides of these streets. In my mind’s eye, the politicians and merchants and religious leaders and common citizens of the day walked past us on their way to the nearby piazza, the nucleus of governmental, religious, and social life. On Sundays innumerable church bells rang to signal the start of the Mass, as worshippers hurried along to the many piazzas.

I know…I know. There were executions, murders, rapes, and diseases. Power struggles and wars. No antibiotics, and an average life expectancy of around forty-five. No health insurance, your wife had a good shot of dying in childbirth, and one out of three of your kids would probably pass on before their fifth birthday. But it seemed like there was, and still is, a connectedness to all aspects of life, right there within walking distance. That’s a nice notion.

Industrialization put the kibosh on this style of living in America, but in the last twenty-five years, mixed-use planning has been making a comeback. Oh that the city planners of Los Angeles long ago had studied this approach. We’re just now getting right what the Italians achieved many centuries ago. Community.

All Hail Caesar (or someone like him!) for getting the ball rolling.