We’ve all got the bug to create. It’s in our genes. We can resist…we can hide…we can put it off. But it’s there, gnawing at us over time. What’s the point, we say. Nobody will see it, or hear it, or read it…or even taste it outside of my home. And what if I don’t like my own creation?

You’ll feel good and be energized. And you’ll get better. The first draft of my first book was awful. But I did it, and proved to myself that I’m capable of writing a novel. Aristotle said, “Well begun is half done.”

One of my good friends is a painter, and a darn good one, but there was a time when I didn’t know this. Tucked away in his home, he would recreate scenes on canvas from the photos he took on various road trips with his wife. When I saw his work, I made him share the paintings with the other men in our life group. He shows his work now at small art shows, and has sold some paintings. But that’s not why he continues. He’s a creator. It connects him with a strong creative drive in his inner being, and when he paints, it’s one of those things that make him feel alive. 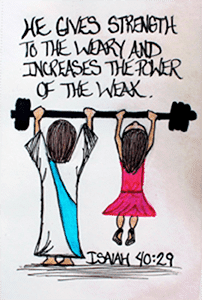 Another close friend, a comedian at the sunset of a very successful career, is daring to remake himself as a movie scriptwriter. He’s a very talented man who knows his craft, and understands all too well the forces beyond his control that align to keep him from his goal. But he creates anyway! He will create until his last days because that’s how he was made. I believe he will succeed.

My spiritual mentor and I wrote and recorded songs for twenty years to lift scripture from “the pages of the Word” to the ears of the children in our church. Never sold anything, but we sure had fun doing it. Maybe it’s a new business you’ve always dreamed of…or the desire to learn how to play an instrument…or learning how to cook. Go for it. Don’t put it off another day. We’re all too busy, I know.